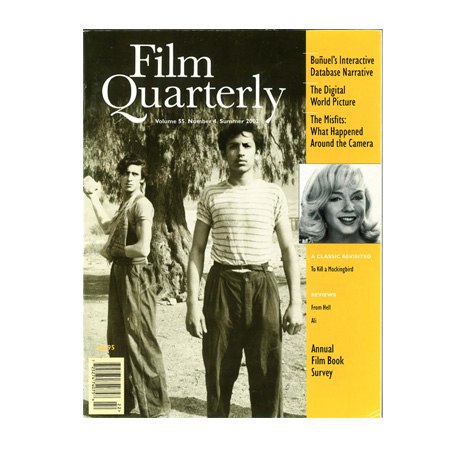 I love this journal, the oldest surviving film journal in the USA, because of its broad appeal—not only to scholars and students of cinema but also to filmmakers and fans. That was part of the legacy of its brilliant former Editor, Ernest (Chick) Callenbach, who also edited one of my books at UC Press. He was the character whom Woody Allen was playing in Play It Again, Sam, and his sci-fi utopian classic Ecotopia made Chick a cult figure.

The first time Beverle Houston and I submitted an article to FQ, it was rejected. The piece was an impassioned appreciation of Performance (1970), starring Mick Jagger and co-directed by Donald Cammell and Nicolas Roeg. Since no one on the FQ Board had seen the film, they didn’t trust our enthusiastic reaction, so we included it instead at the end of our first book Close-Up (1972), as a chapter titled “The Ultimate Performance.”

The first piece of ours that FQ did publish was an essay titled, “Truffaut’s Gorgeous Killers,” in Winter 1973-4. From then on I was publishing most of my essays in FQ, sometimes two pieces in the same issue—as in Summer 1974, which featured “The Return of the Outlaw Couple” and my review of Zardoz.

I was asked to join FQ’s Advisory Board in 1977—the same year that I published my essay “Reflections on Jeanne Dielmann”, which was featured on the front cover. In fact, I have published most of my best essays in FQ, including:

I have always felt loyal to this journal and am still a member of the board now under the able leadership of B. Ruby Rich.