CULTIVATING PASADENA: FROM ROSES TO REDEVELOPMENT 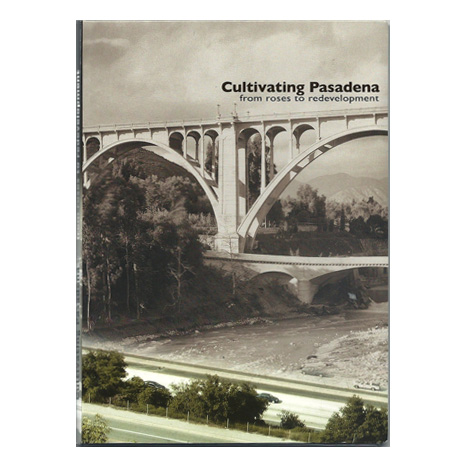 In 2003 we were approached by the Automobile Club of Southern California, which was eager to collaborate on an interactive project about Pasadena, using then-now rephotography as in our earlier project Bleeding Through Layers of Los Angeles. While the Auto Club was primarily interested in featuring vintage photographs from their own visual archive, Labyrinth’s interface designer Rosemary Comella and I welcomed the opportunity to make another digital city symphony beyond Los Angeles—one that would continue using her “bleed-through’s” as time travel and would pursue Pasadena’s unique urban history wherever it led. We saw the central conflict as a choice between historical preservation (saving what is unique about the city’s history) and urban redevelopment (keeping up with the rapidly changing times). This conflict was particularly strong in a small city like Pasadena, which was located within the shadow of a huge metropolis like Los Angeles, where transformation was clearly the driving force. That’s why so many Pasadena residents were personally engaged in documenting the city’s unique history, for preservation was crucial to distinguishing it from LA. And that’s why we didn’t want to limit the project to the Auto Club’s collection of images.

Driven by Rosemary’s background in photography and passion for rephotography and by writer Karen Voss’s prior research on the cultural history of Pasadena, Labyrinth mobilized a group of student assistants to help us locate and shoot new sites. And whenever we showed work in progress, we received enthusiastic responses from residents, who were eager to share their own stories and images. Consequently, the scope of the project kept expanding. We were not merely documenting the annual rituals of the Rose Bowl and Rose Parade and the city’s ground-breaking freeway, but also addressing troubling issues like racism: from the city’s inter-racial myth of Ramona, to the alleged anti-Semitism at Caltech, to Jackie Robinson’s home-town experience of racism, to restrictions imposed on people of color who wanted to swim in Pasadena’s public pools. To cover these expanded topics, we included interviews with residents and distinguished historians.

We ended up producing (what we call) a transmedia network, which was exhibited at the Pasadena Museum of California Art, from October 9, 2004 to March 6, 2005 (a run that was extended because of the enthusiastic response of museum-goers). This transmedia network consisted of: an interactive DVD-ROM; an interactive museum installation based on a large-screen presentation of the DVD-ROM; a re-photography exhibition, including 25-pairs of “then-now” photographs of Pasadena mounted on the museum walls; and a print catalogue containing high-quality prints of those 25 pairs, with five original essays by Marsha Kinder, Rosemary Comella and Karen Voss from Labyrinth and Matthew Roth and Morgan P. Yates from the Auto Club.