INTERACTING WITH AUTISM: A VIDEO RESOURCE 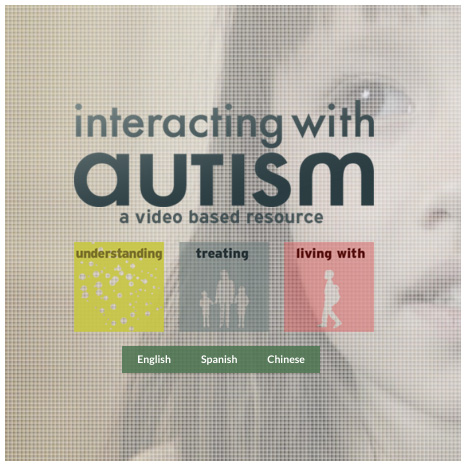 In this collaboration with 3-time Oscar-winning documentary filmmaker, Mark Jonathan Harris, we were creating a website designed to help the autism community—not only parents, teachers and health care workers but also individuals on the spectrum. Mark and I were co-PI’s and co-producers, with Labyrinth’s Scott Mahoy functioning as Creative Director, and with media artists Ioana Uricaru, Laura Cechanowicz, and Shelbi Jay as co-producers. We were also determined to include people on the spectrum—not only as subjects but also as editors (like USC cinema student Daniel Gross) and directors (like Alex Plank, founder of Wrong Planet, and Stephan McFadyen, whom we never met).

The project was funded by two grants from AHRQ (The Agency for Healthcare Research and Quality), a government organization that was primarily interested in our assessments of treatments. But we had broader interests, which are reflected in Scott’s accessible 3-part design: Understanding Autism, Treating Autism and Living with Autism. The website includes 32 movies, divided among these three categories, plus at least 30 interviews. Although we made most of these films ourselves, we also hired others (especially USC production students and recent grads) to cover a wider range of issues. Personally, I was eager to deepen my own interest in neuroscience and its relationship to narrative. I wrote five of the films—Don’t Mourn for Us: Autism and Neurodiversity, the Overview of Treatments, Prevalence, Sensory Experience and In the Media (both the overview and most of the reviews in the database).

Since Mark and I come from cinema rather than neuroscience, we assembled a board of advisors and consultants to make sure the information provided was reliable and up to date. Rand Corporation vetted the information on treatments and selected articles that could accompany these movies. We also had the website professionally tested—by focus-groups of parents, teachers and healthcare workers—whose reactions were overwhelmingly positive. But whenever they pointed to omissions, we responded by adding new movies.

We launched the website at USC in September 2014, with panels featuring many of the experts we had interviewed, with local groups providing services to the autism community, and with large screen displays of the website.

What is unique about our website is that it is totally comprised of full-screen videos, which makes it more emotionally compelling. We deliberately emphasized the diversity of those on the spectrum and the variety of options open to them. We wanted to give visitors a sense of hope. To increase its accessibility, we made the website tri-lingual— in English, Spanish, and Mandarin— and hope it will continue to become more international.